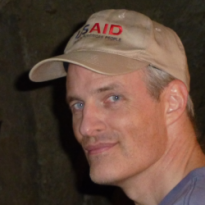 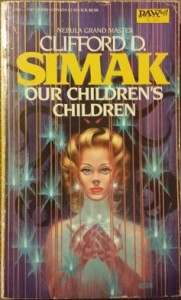 Our Children's Children isn't so much a novel as an exploration. The idea is one echoed later by [a:Julian May|23284|Julian May|https://d202m5krfqbpi5.cloudfront.net/authors/1340457886p2/23284.jpg] in her [b:Saga of Pliocene Exile|378639|The Many-Coloured Land (Saga of Pliocene Exile, #1)|Julian May|https://d202m5krfqbpi5.cloudfront.net/books/1174314750s/378639.jpg|368245] - humans come to our time, escaping from 500 years in the future, only our time is a pit-stop on the way to the Miocene.
The story is a careful and thoughtful examination of the ways in which humans - generous, cautious, and venal - might react. It's packaged nicely - mainly through the eyes of the White House press secretary - but what Simak is interested in here is the idea, not primarily the people.

It's an interesting exploration, and holds up for most of the book. The end, however, is something of a letdown. Having created a troublesome situation, Simak cops out at the resolution. It essentially fixes itself.

Despite the somewhat weak ending, the concept is interesting and thought through. Plus, this is written with Simak's characteristic engaging style and pleasant characters - that's primarily what rounds it up to 4 stars from 3.5.
Tweet
2324 BOOKS
Facebook Twitter Pinterest Goodreads Metaphorosis Books